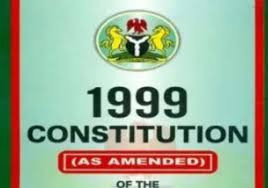 Leaders and elders in Yorubaland under the aegis of Afenifere Renewal Group (ARG) have agreed that the 1999 Constitution being operated in the country can no longer sustain the desired togetherness of the people.

[This is as the stakeholders recommended self-determination or a peaceful dissolution of the country as a panacea for the refusal of the country to give the desired restructuring many groups have been clamouring for in almost three decades.

The stakeholders spoke in different remarks at the ARG Summit on Yoruba nation question.

At the summit, stakeholders expressed divergent views on the issues of secession, restructuring, federalism and constitutionalism amidst the various agitations for self-determination, advising that the Yoruba should repackage their clamour by bringing together eggheads and experts to brainstorm on the way forward.

Speaking on the rationale for the summit, Chairman, ARG, Wale Oshun, said the country is at a cross-road and the Yoruba need to consult with relevant stakeholders before taking a position.

He said: “Nigeria is at a cross-road and we the Yoruba people have always bear the brunt and burden of nationhood. And we are paying a disproportionate price for keeping the country united and we thought that there is a need now to start introspecting, listening to the voices of the ordinary Yoruba persons on what they ordinarily want in Nigeria, is it being part of the country or not? What would they like to see as changes because the present constitution cannot sustain any development mode?

“So, is it restructuring? But you also realise that people have also been advocating for restructuring since 1992. So, people are now saying 29 years down the line, what is the sense in keeping and asking for the same thing that nobody is listening to?

“So, we want to find out amongst ourselves, what is the way forward. And as you can see from the interactions that we are actually at a crossroad. But something will emerge and an idea will evolve.”

One of the guest speakers, who is a former National Commissioner with the Independent National Electoral Commission (INEC) and Professor of Sociology at the University of Lagos, Lai Olurode, said the way the idea and message of restructuring is being presented is not good enough.

He faulted the agitation and clamour in that it presented the idea as a winner take all plan, even though it holds the potential for a win-win situation for all the parties, geo-political zones in the country.

The Leader, Ilana Omo Oodua, Prof. Banji Akintoye, who was expected to speak at the event, could not join online due to poor network while the summit lasted.