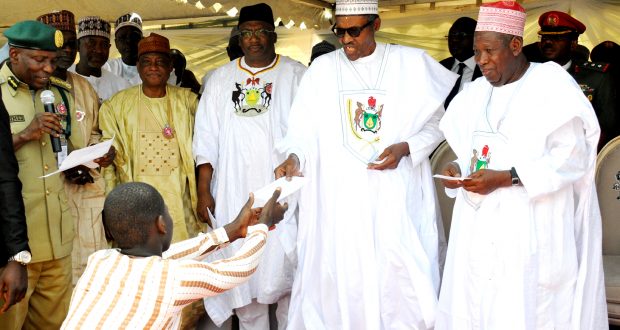 2019 Elections: APC Kano to sue Buhari if he decline to contest

Some top member of the All Progressives Congress (APC), in Kano state, have promised to procure nomination forms for 2019 presidential election for President Muhammadu Buhari and threatened to sue him if he declined their offer.

Presidential spokesman, Garba Shehu, in a statement, in Abuja, said the APC leaders made the promise at a meeting held on the margins of the President’s state visit to Kano.

He said that the leaders adopted  Buhari as their candidate for the 2019 general elections, saying that they also expressed commitment and support to Governor Abdullahi Ganduje as their sole candidate for 2019.

According to him, the State Chairman of the APC, Alhaji Inuwa Abbas, hinged the endorsement of the president on his achievements in the last two years, especially in the fields of security, the war against corruption and the restructuring of the economy.

Abbas said: “Security is important for everyone, not just for Borno, Yobe and Adamawa states. It’s even more so for us as a commercial and industrial state. We are convinced that you are best for these times when the country has begun to muster energy and resources to develop agriculture, infrastructure and empower the younger citizens.’’