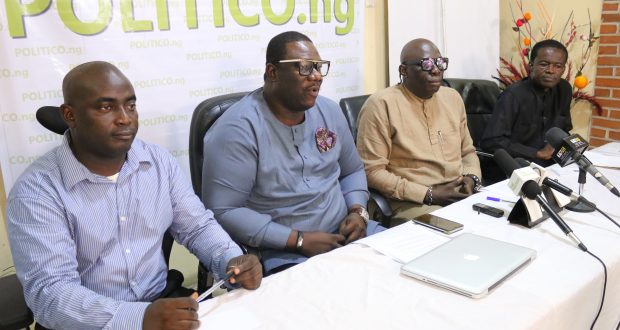 2019 Elections: The count down begins

It is 441 days to the next general elections in Nigeria, but are the politicians and voters aware and we ready?

Who are the potential aspirants? Have they planned on what to do to get in campaign? Are they in touch with the realities being faced by the masses across the nation?

And, are we as the electorate asking them, the right questions?

These and other facts lead Politico.ng, an online specialized news website to launch a Timer, that tells exactly how many days it is before the next general elections of 2019 for the Presidential, National Assembly, Governorship and State Houses of Assembly .

At the media briefing, on December 1, 2017, the Publisher, Lai Omotola, assured a house-full of journalists from print and broadcast media that the medium would ensure objectivity in its reporting of politics.

He said that originality and creativity, where all sides are considered in a story, would be used.

Omotola added that Politico.ng will be an avenue for direct and impact-full feedback mechanism to stakeholders like the Independent National Electoral Commission (INEC).

“This will contribute in no small way to make our electioneering process better. The agenda is being set and we must all partake in it.

” It takes 18 months to plan a Presidential election and the candidates must during this period visited the 774 local governments and 36 states to know what each of them needs. But in Nigeria, it’s the opposite.

“We are just here to create an awareness for the electorate. We are not launching politico.ng because the site will sell itself,” he said .

Also speaking, the Editor-in-chief, Emmanuel Malagu, said the website will cover and reports all major happenings in the political arena starting with the national convention of the Peoples Democratic Party (PDP) which comes up December 9.

Politico.ng is a one of the website platforms of Last Media,which specialises in reporting and analysing politics in Nigeria.

Other platforms are Theadvocate.ng, which reports general news; entrepreneurtv.ng, which specialises in reporting and analysing business reports and economy; infrastructurenews specialises in reporting and analysing news stories and happenings in infrastructure, while Obathinktv.com will wet the appetites of its audience with non-stop entertainment.

Previous: Cross River budgets N1 trillion for 2018
Next: Tinubu advises young Nigerians to have hope in the country