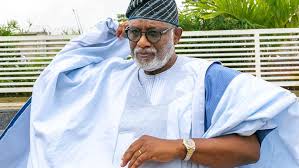 2023: APC must not misuse its chances, says Akeredolu

Governor  Rotimi Akeredolu of Ondo has said the  All Progressives Congress (APC) must endeavour to sustain internal democracy in the conduct of its forthcoming National Convention slated for March 26.

According to the Governor,  the party must not throw away its chances ahead of next year’s general elections.

He made this remark  when he received the Senator Sani Musa campaign organisation in Akure,

Akeredolu added that uling APC must represent a democratic institution that everyone would appreciate.

He noted that the victory of the ruling party n the just concluded Akure Federal Constituency by-election was due the internal democracy that was employed to elect the party’s candidate.

The Ondo Governor noted that the APC must show its values through internal democracy for the sake of credibility.

According to him, “What we are faced with now, for me, is the soul of our party. My party, your party, our party. You have alluded to it that a number of people came together to form alliances to unseat a government that was in power for over sixteen years. We have the legacy parties and other people joined.

“We got that mass of people to come together. We were able to change the narrative about politics. We took the bull by the horn. We have not been in office up to eight years. We can not afford to throw away our chances. We must get our acts together as a political party.

“We must have values. What are our core values? Do we want to represent a democratic institution that everyone would appreciate? Let’s create that niche for ourselves. I’m not opposed to zoning offices because there must be mechanism for balance. For me, I have nothing against zoning. What I have said, and that is why I will continue to encourage you, is that there must be internal democracy.”

Reacting, Senator Musa, who is representing Niger East Senatorial District and Senate Services Committee chairman, said his visit was for consultation and to urge on the Governor to support him for his aspiration to become APC national chairman.

“We know how you want this country to be united, a country where there is equity, fairness and justice. You want a country where everyone of us will believe that Nigeria is for us all. I am in line with your ideas and I believe, if we can translate same to our political party, we will be one,” he said.

“I will commend you for the fact that you have chosen to have your ideology and you have adopted that in this State. Whatever anyone will say, you are doing very well, and those are the type of leadership we should be able to give our people.

“This party needs a decisive leader. It is not by age or by figure or by physical look. It is by your antecedents and how strong you can be. The devolution of powers we are talking about, the party has done something. But still, nobody has the gut to implement it.