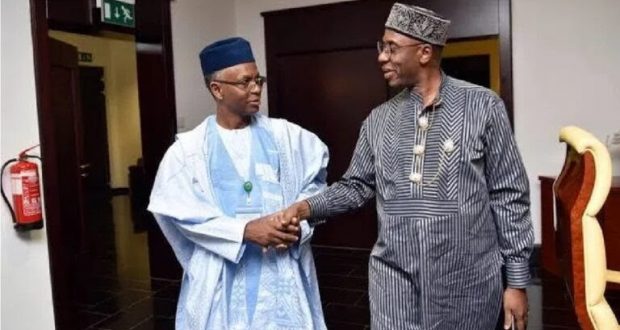 Despite the fact that 2023 elections is still far, posters of Transport Minister, Rotimi Amaechi, and Kaduna State Governor, have flooded some parts of Abuja, Nigeria’s capital.

The posters do not have the logo of any political party but carry the name of an organisation – ‘National Consolidation Movement’.

A source told newsmen that the possibility of the All Progressives Congress (APC) chieftains running together is high.

The politician close to the ruling platform as well as the main opposition, Peoples Democratic Party (PDP), gave reasons to buttress his position.

Others are network and contacts, incumbency as office holders, influence within the APC, and clamour for power to return to the South.

Analyzing why the South-South may get the nod, the source told citizens not to forget that the South-West has for thirteen years occupied the two topmost positions in Nigeria since 1999.

He feared that the South-East may face some objection in the APC due to skepticism about widespread acceptability, agitation for secession, electorate support, and war chest.

Although the party is in charge of Imo State, with stalwarts trying to gain more supporters in the region, it remains unclear if the nation’s leader is favourably disposed to an Igbo presidency in 2023.

Reminded how the South-West, led by ex-Governor of Lagos State and APC national leader, Bola Tinubu, delivered the majority of votes for Buhari in both general elections, the source stressed that ticket zoning to the region is in doubt.

“President Buhari may not be opposed to Amaechi and El-Rufai’s ambition because as I speak, these two are part of the top five figures running the APC.

“(Kayode) Fayemi was considered but a Yoruba man governed Nigeria for eight years after we returned to democracy. Another is the incumbent VP – eight years in view. This factor knocks the Ekiti Governor out.

“I believe that any power shift will strongly consider the South-South and South-East. Options are being weighed. However, in terms of funds, voting figures and trend, local support, and the likes, South-South is ahead of South-East.

“Buhari and El-Rufai are close. The Governor was one of those who insisted the President contest again in 2015 after three attempts. Many would remember the efforts of Amaechi after he joined APC from the PDP late 2013.

“He is also close to Buhari, he was Director General of the President’s campaign twice and was successful. Things may change later but I believe Buhari will support their aspiration”, the politician said