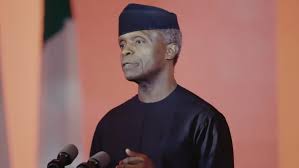 Vice President Yemi Osinbajo will today evening host Senators on the platform of the All Progressives Congress (APC) to Iftar (breaking of fast) as part of his consultations.

The development was was contained in a letter of invitation read by Senate President Ahmad Lawan at plenary.

It was learnt that the letter was signed by the Senate Leader, Yahaya Abdullahi.

The political  parley expected to take place at Aguda House by 6.30pm.

It will be recalled that  on Sunday evening, the presidential aspirant hosted APC Governors for Iftar where he informed them of his ambition to contest for the office of President in 2023.

Osinbajo is also expected to formally inform the APC Senators of his desire to succeed President Muhammadu Buhari, during the Iftar.

On Wednesday, Osinbajo will do same for the House of Representatives in his bid to gather momentum for the 2023 contest.