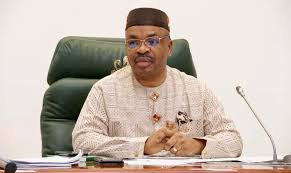 Former Chief of Staff to Governor Udom Emmanuel of Akwa Ibom State, Mr. Ephraim Inyang-eyen, has attacked his former boss on choice of his successor for the 2023 governorship elections in the state.

According to him, Senator Albert Bassey Akpan should be rewarded with the governorship of the state.

It will be recalled that  Governor Emmanuel had said that his choice of Pastor Umo Eno, as his preferred successor was revealed to him by God.

Reacting to the development during a  rally organised by Eket Youths on Saturday for the Senator Bassey Akpan (Uyo Senatorial District), he told the people not to be deceived, saying that revelation is not via an iPad

According to him, “Don’t allow anybody deceive you, I heard them saying they had a revelation, revelation is not via an iPad. God does not give one man revelation. The Bible says that in the mouth of 3 or 4 witnesses, truth is established. God has told me that Senator Bassey Akpan is the next governor.”

According to him, the governor failed to honour  the agreement they had in 2014 when Senator Akpan shove his governorship ambition that he would in turn be supported in 2023 when power will return to Uyo Senatorial District.

Previous: Tinubu’s Ambition: Ganduje not speaking for the entire north- Arewa youths
Next: There is no change in our national leadership structure- APC denies report