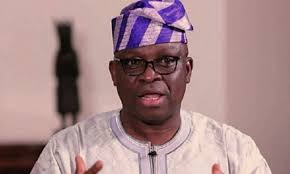 Ex-Ekiti State Governor Ayodele Fayose has unfolded his ambition to serve as the next president.

He said: “May I also state clearly that I will be seeking the ticket of the PDP to contest the next presidential election,” he said in a statement in Lagos.

According to him, he never endorsed former Anambra State Governor Peter Obi for president on the platform of the Peoples Democratic Party (PDP).

Fayose said the report credited to him that he had endorsed Obi and zoning of the Presidency to the Southeast was false.

He added: “No doubt, I have great respect for Peter Obi as a leader and I respect his aspiration, but at no point did I endorse his presidential ambition or that the presidency be zoned to the Southeast.

“Rather, my take is that the presidency should be zoned to the Southern part of Nigeria.”

Previous: 2023: Any monarch who endorses aspirant will be dealt with- Enugu traditional council
Next: Insecurity: APC brought in terrorists to rig 2019 election- PDP