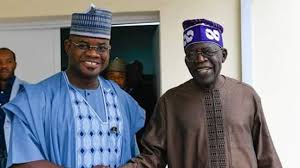 Tinubu held the meeting as part of its continued efforts to have  consultations with party leaders after winning the presidential ticket at the primary election on Wednesday.

During the meeting, Governor, Bello  donated an office to the presidential campaign of Bola Ahmed Tinubu.

He made the announcement on Friday during the visit of Tinubu in Abuja..

It will be recalled that after Tinubu clinched the ticket, the camp of Governor Yahaya Bello said that the primary election that produced Tinubu was crooked and compromised.

It will also be recalled that Yahaya Bello walked out of northern Governors and the APC National Chairman during a meeting in the  tick of the primary election last week Tuesday.

Previous: God has not told me to become Tinubu’s running mate- Lawal
Next: Wike moves against Amaechi and Cole, orders Attorney-General to prosecute them