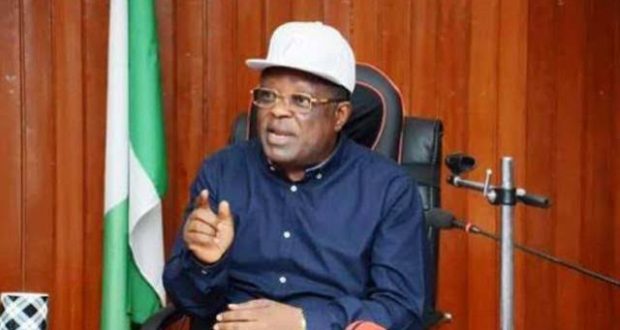 Gov. David Umahi of Ebonyi has denied the widespread rumour that he pitched tent with APC to contest for presidency in 2023.

Umahi said this while speaking with stakeholders in a  political meeting on Sunday.

While justifying his defection he said he did not negotiate to contest the position under the APC.

“My next line of action after my governorship is in God’s hands and there is nothing God cannot do.

“Anyone wishing to contest for the presidency or governorship of the state should meditate and pray that God should not send him if God’s spirit is not with such person.

“This is because it is going to be very tough and we are really in the end time,” he said.

He added that those battling with him for moving to APC should not over step their boundaries, adding that his meekness should not be taken for granted.

“We will not allow the PDP to die in the state but still assist its executives to survive.

“I am still the father of the state and those fighting me for joining the APC should not cross the line.

“I will never confront a sitting governor but try being his friend because the powers of government are enormous,” he said.

“We should set up committees at the wards and Local Government Areas to aggressively pursue our membership registration process and the disbursement of palliatives to our people in December,” he said

Previous: APC planning to dump Buhari over bad governance, PDP alleges
Next: US 2020: Trump blasts judges for dismissing his suit