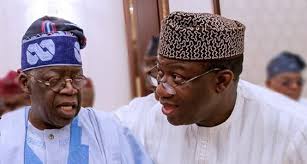 Fayemi said the office of the President is not an inheritance, hence, he did not betray Tinubu by joining the race for the Presidency.

Featuring on Channels Television last night, the Chairman of APC Governors’ Forum said APC Presidential aspirants are to make a difference in the lives of Nigerians.

He said, “The Asiwaju that I know and have interacted with will not subscribe to demonising anyone. I don’t believe that he would use terminologies like betrayal, this is not an inheritance; it is not a traditional title that we are seeking.

“The office that we are seeking is to make a difference in the lives of Nigerians. It is about Nigeria which is the commonwealth of all Nigerians.”

Tinubu had earlier signified interest in occupying the same office.