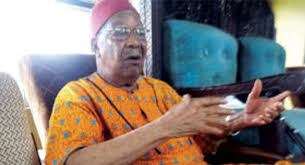 A Minister of  Aviation Minister, Mbazulike Amaechi has disclosed those who would decide if the South-East would produce Nigeria’s president.

Amaechi made the remark while urging the Igbos to be politically grounded in parties with national outlook.

This, Amaechi said, would help the course of Igbos.

Speaking with newsmen, he said politicians were not creating an enabling environment for peace and unity by ignoring the Igbos.

also decried the marginalization of the South-East.

According to Amaechi: “If the politicians decide that the South-East should produce Nigeria’s president, then the region would produce it.

“If the politicians decide that the South-East should not produce and the South-East continues to be excluded from the elections in the country, it will not be good.

“I don’t think they are creating a fertile ground for peace in the country. A president can only be produced through a national political party and the Igbos should belong to the two major political parties that is aiming to rule the country.

“Ignoring Igbos is not watering the ground for peace and unity in the country.”