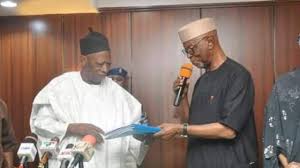 2023: No presidential aspirant has been disqualified by APC- Adamu

The National Chairman of the All Progressives Congress, APC, Abdullahi Adamu, has said that nobody was disqualified  among its 23 presidential aspirants.

He made this remark on Saturday while speaking with journalists on the report of the screening committee.

Adamu said that, the committee did not screen out aspirants, but instead graded them on certain criteria.

“As it stands, no aspirant has been disqualified.”

Oyegun had on Friday announced that 10 presidential aspirants on the party’s platform were disqualified while about 13 of them would battle it out for the party’s sole ticket.

He said that the basic constitutional qualification to aspire to be a president of the country was also put into consideration.

Previous: Keyamo lauds APC governors for backing southern presidency
Next: I have no plan of dumping APC- Shina Peller