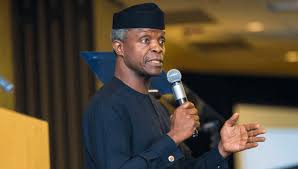 2023: Osinbajo dissociates self from anti-Tinubu’s campaign

The Vice President, Yemi Osinbajo has asked Nigerians not to give attention one Olugbenga Olaoye, Co-Convener, ‘Osinbajo Think Thank’ over his comments during an interview.

It will be recalled that Olugbenga while speaking about the presidential ambition of Bola Tinubu in an interview with Arise TV said Nigerians do not want another sick president who would be embarking on foreign medical trips.

According to him,  Nigeria needs a capable person like the Vice President who formally declared on Monday to run for the top political office in the 2023 elections.

He said, “We cannot afford another sick President who will be travelling to London all the time as we currently have, we need someone who is mentally sound. The little time that Osinbajo spent leading FEC was different. Things were moving”

Reacting to the comment, Osinbajo through his spokesman, Laolu Akande, said Olugbenga does not represent the office of the VP and should be ignored.

In a tweet on his official Twitter page, Akande claimed that he is not aware of the Osinbajo Think Tank group

The tweet reads, “Indeed this gentleman does not represent the VP nor the Office. His views are completely & totally his own. This particular opinion he has expressed on TV is deplorable and in bad taste. I am not even aware of the so-called Osinbajo Think Tank he purports to represent. Pls IGNORE”

Previous: Tinubu explains why Nigeria needs him as President
Next: 2023: Fayemi reveals when he will make his ambition known