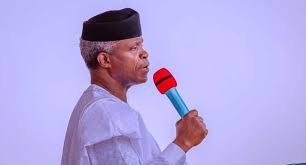 2023: Osinbajo not stepping down for Tinubu- Support group

Ahead of the presidential primaries of  the ruling All Progressives Congress APC, a group supporting Vice President Yemi Osinbajo know as the Progressive Project TPP – an umbrella organization of all pro-Yemi Osinbajo support groups, has dismissed has dismissed some viral reports that the vice president was considering stepping down for a national leader of the party, Asiwaju Bola Ahmed Tinubu.

The group lamented that some  paid agents and loyalists of some aspirants have intensified the spread of falsehoods against the Vice President, Professor Yemi Osinbajo.

Speaking, the Director of Operations at The Progressive Project TPP, Alhaji Usman Aliyu Usman noted on Sunday that “some paid agents and other supporters who feel threatened by the candidature of Professor Osinbajo seem determined for a gutter fight which Osinbajo supporters cannot join”.

Part of the statement reads; “One of our visible supporters, Professor Olusola Adeyeye, a two-term Senator who represented Osun Central Senatorial District between 2011 to 2019 made some weighty statements about the APC presidential primaries on Saturday and by Sunday, really baseless and mischievous anti-Osinbajo statements began circulating.
“Unfortunately, one of these came from Mr. Daniel Bwala, an aide to Deputy Senate President, Senator Omo-Agege who currently appears to moonlight as spokesman for the Bola Tinubu campaign.

“Specifically, without any proof, Mr. Bwala started circulating a video clip with claims that Professor Yemi Osinbajo is ‘allegedly planning to step down for Asiwaju’; Mr. Bwala had no evidence and he ought to know better than going to town with such.”“Without doubt, Professor Yemi Osinbajo is still riding high in the race and our decision not to interfere in some camps’ deliberate spread of illusion and untruths is only motivated by our genuine confidence in our candidate’s prospects.

“As stated long ago, no group linked to TPP will join any individual or group in playing gutter politics or smearing others but we need to unequivocally state that Professor Yemi Osinbajo is not contemplating any measure of capitulation to any candidate.

Previous: How APC is planning to elongate its tenure beyond May 29, 2023- PDP
Next: 2023: Consider Nigeria’s future, vote for Tinubu- Group urges APC delegates