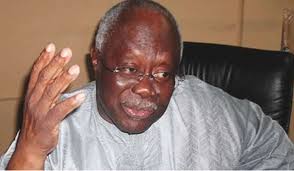 A top stalwart of ther Peoples’ Democratic Party (PDP) Bode George has called on the party to make a definitive declaration on zoning the presidential ticket to the south.

George who made the call in a statement said it is the right thing to do. He said his position is justified by the party’s constitution and tradition.i

He said that it is mmoral for the PDP to keep mute on the all-important issue.

However, he noted that anyone could still vie for the position, despite the party’s zoning arrangement because the constitution of the country guarantees that any citizen that has no record of criminality can vie for any elective office in the land.

The retired commodore, who said he has no axe to grind with anyone, warned that the main opposition party may be digging its grave if it fails to make a declarative statement on zoning.

He said this would make Nigerians distrust the party. He added that once the party loses the trust of the electorates, political opponents would cash in on that to bury the party during the next presidential election.

He said it was unfortunate that some selfish politicians were bent on derailing the party, by ensuring that it does not come out clean on zoning.

George said the ruling All Progressives Congress (APC) had already zoned its presidential ticket to the south. He, therefore, called on the PDP chairman, Senator Iyochia Ayu to avoid the temptation of foreclosing the party’s chances in the year’s general election.

He said: “The party must as usual make a definite statement to the public that it has zoned the presidency to the south. This will make us appear to be law-abiding and fair.

“The greatest challenge facing our party now is this issue of zoning. I was a member of the zoning committee and there were two major issues that led to the constitution of the committee. While some say we don’t need zoning anymore because the party has gone beyond that, others are of the view that we cannot jettison zoning.

“I confronted the committee with the most recent constitution of our party. Section 7 (3c) states that the party shall pursue its aims and objectives by adhering to the policy of rotation and zoning of the party and public elective offices pursuant to the principles of equity, justice and fairness. And after I read to them, they all kept quiet.

“The above has said it all and how come some are saying zoning is no longer fashionable?” He said that provision in the party’s constitution remains sacrosanct until it is changed.

He said six months to every election year, the party must come out to declare its stand on zoning. He added: “People thought the party had taken a position. No, it hasn’t.

“Some PDP chieftains argue that President Muhammadu Buhari is not a member of our party. But, I asked them, from which part of the country is he from?

“The PDP, therefore, must as usual make a definitive statement that the presidency is zoned to the south so that we would be seen not only obeying the law of our party, but we will appear before the blindfolded lady of justice that we have done the right thing. I am saying this for posterity’s sake.

“Let us be honest, be just and be fair to jointly agree that the presidential ticket of the party must go to the south this time around. For saying this, let me put on record that I don’t have any qualms or resentment against anybody. We do not have any power to override the constitution that gives anyone the privilege to contest for any elective office except you are an ex-convict.

“When Baba Ekwueme contested, Rimi threw in his hat and contested too. Rimi also did so in 2003. So, we have past experiences. But the party was strong on it that the ticket was zoned to the south.”