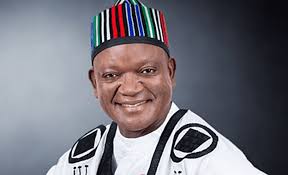 Benue State Governor, Samuel Ortom has stated that the Peoples Democratic Party, PDP, is in the best position to bring genuine change to Nigeria, adding that the ruling All Progressive Congress has inflicted security and economic ruins on the country.

Governor Ortom spoke on Tuesday during an interview with journalists on arrival at the Makurdi Airport from Bauchi where he attended PDP Governors’ Forum meeting.

He stated that the internal wranglings within the PDP would not limit its chances of winning elections in 2023, pointing out that it was natural to have misunderstanding but being able to manage the same was paramount.

Governor Ortom noted that a series of meetings the PDP Governors’ Forum had held across the country were meant to reposition the party, instill hope and confidence in Nigerians that if given another opportunity, they could take the country out of the woods.

According to Governor Ortom, the Governors had agreed that the current APC-led Federal Government has failed Nigerians in all ramifications and should therefore give way to PDP to fix the country.

The Governor advised the Federal Government against intimidating Nigerians, citing the incident involving Bishop Matthew Kukah of Sokoto Catholic Diocese who he noted, was being castigated for speaking out his mind about happenings in the country under President Muhammadu Buhari.

He noted that as one who has been worried about the state of affairs in the country and being on the same page with the Bishop, he could not have captured what the clergy man said better than him and advised the Federal Government to rather heed the voice of reason.

On the allegation that he has taken sides over the Bonta-Ukpute communal crisis, Governor Ortom said those accusing him should be ready with facts to prove or face the consequence of their accusations in a competent court of law, adding that, he was meeting with stakeholders tomorrow to find permanent solution to the crisis, Daily Post reports