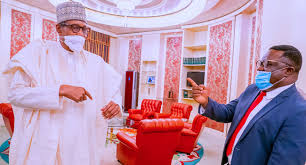 2023 Presidency: Buhari has given me approval to join race- Ayade

The ruling party began the sale of forms for political offices yesterday.

It will be recalled that the Kogi State Governor Yahaya Bello became the first to obtain the presidential form.

Speaking to reporters, Ayade said he did not originally contemplate running and only came to convey his support to the President on his successor’s selection.

Ayade added he would be flexible with his quest for the party’s presidential ticket.

He promised to support any person the party’s delegates settle for.

The governor said: “I didn’t come to the President to tell him I’m running.

“I went to the President to tell him I’m here to join him, to support him in the process of producing his successor and that peradventure power is to go to the South, I’m the only sitting governor from the Southsouth.

“The President didn’t allow me to finish and says: ‘I know you’ and recounted our relationship.

“So, if you ask me the question, am I running? My answer is that I am running because the President has said: ‘You go while I watch’.

“I want you to report me intellectually. I want you to understand that truly, outside all the cheap talks, the truth is that my approach to be President is different. I will support the President’s candidate.

“Even though I’m on standby, I will support the President’s candidate and the President said: ‘You are not outside of my view. Go, I give you blessing, go and consult; ensure that you engage with key people while I watch.’

“I think it’s a clear indication that I have the right to go and try, to go and declare. So I will.”

Ayade said he would drop his interest whenever the President makes clear who he is backing.

“I’m willing to stop at any point where it becomes necessary, that I find that my interest does not align with the directions of the President.”

On rumours that the APC might present former President Goodluck Jonathan as its sole candidate, Ayade said: “I have great respect for President Jonathan and so, I have no challenges whatsoever.

“I believe that the party leadership will decide the appropriate candidate that will take our party to victory and so, if you heard me well, I am just part of the family, absolutely loyal to the President, seeking to run for President and I’m running.

“At any point in time the leadership of my party, the APC, feels that President Jonathan is the appropriate candidate that will take us to victory, I will turn my support for him.

“I am never ever going to fight the establishment, the institution, the aristocracy, the spiritual vortex of which God has placed a leader on the country, I will never question the powers of the leader of the country.