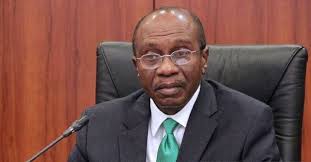 The Governor of Central Bank of Nigeria (CBN), Godwin Emefiele has finally declared intention to contest for 2023 Presidency.

On Friday, he also joined the list of aspirants by picking the expression of interest and nomination forms to contest the under the platform of the All Progressives Congress (APC).

It was gathered that he  picked his form at the office of party’s organising secretary, at the International Conference Centre (ICC) in Abuja, D

It will be recalled that he has been rumoured to be in the race for the APC ticket since late 2021.

Emefiele did not open up  but said he was focusing on supporting the government’s efforts to strengthen the Nigerian economy.

Emefiele had in March 2022 said he is more interested in helping President Muhammadu Buhari finish well.

“My focus at this time is a robust monetary policy and fighting inflation, which is now a global problem; building a strong financial system in an increasingly uncertain global economy, development finance and supporting farmers and manufacturers in our self-sufficiency and import substitution drive, raising N15 trillion for InfraCo infrastructure financing, building a world-class International Financial Centre in Lagos, as well as support the @MBuhari administration to finish strong,” Emefiele tweeted.

Previous: Speculations laid to rest as Tinubu endorses Sanwo-Olu for second term
Next: 2023: Tinubu, Osinbajo, Amosun and others hold meeting in Lagos