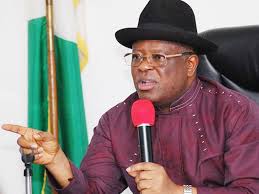 2023 Presidency: Chances of South East lie in the hands of God- Umahi

The Governor of Ebonyi,  Dave Umahi  has hinted on the chances of the Southeast producing Nigeria’s next president in 2023.

The Governor spoke on Channels Television on Monday night while responding to a question on the chances of the Southeast producing the next president.

Asked if Igbos would be allowed to pick the presidential ticket, Umahi: “It’s in the hands of God.

“He is. He directs our affairs. He gives breath to every man, so power belongs to God. Whatever thing we wish will come through only through God. If God says yes, no one can say no.”

Umahi’s comment is coming at a time Northern youths had declared that power would remain in their region in 2023.

Previous: 2023: Nothing will stop APC from achieving victory in 2023- Omo-Agege
Next: Makinde of Oyo receives members of PDP reconciliation committee