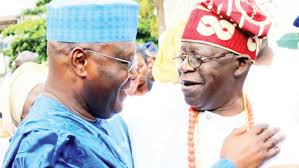 A Federal High Court in Abuja, has refused to grant a motion seeking an order compelling the Independent National Electoral Commission (INEC) from accepting Bola Tinubu as the All Progressives Congress’ (APC) candidate for the 2023 presidential election.

The court also declined to grant the prayer, asking INEC from recognising Atiku Abubakar as the Peoples Democratic Party (PDP)’s presidential candidate for the next year’s poll.

Justice Inyang Ekwo, in a ruling, rather ordered the plaintiffs; Incorporated Trustees of Rights for All International (RAI) and Northern Nigerian Youth Democrats (NNYD) to put all the defendants on notice.

Justice Ekwo, who refused to grant prayers one, two and three in the ex parte motion marked: FHC/ABJ/CS/942/2022 dated and filed June 22 by the plaintiffs’ counsel, Kingdom Okere, however, granted prayers four, five and six.

The judge further ordered the lawyer to effect service of the court papers on the defendants within seven days of the order and adjourned until July 14 for further mention.

It was gathered that RAI and NNYD, through their lawyer, had filed the motion seeking for six orders.