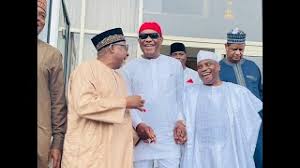 Governor Wike yesterday, had a closed-door meeting with some other politicians aspiring for the Peoples Democratic party, PDP, ticket in the 2023 elections.

It should be noted that the Governor had also declared interest in the presidential race.

It was learnt that he hosted the aspirants in Port Harcourt, the Rivers State capital.

Speaking with newsmen after the meeting, Governor Wike said their major interest is to ensure that there is unity in the party and to make Nigerians happy through the coming elections.

According to Wike, PDP is set to develop formidable strategies that would enable the main opposition party gain victory in the 2023 presidential election.

“And I can assure you that we are going to work as a team to make Nigerians happy.”

Previous: Any PDP aspirant will be 1000 better than Buhari, says Ayu
Next: 2023: Look at him, does he look like a president?- Asari Dokubo mocks Wike