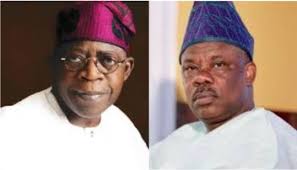 2023 Presidency: I am not stepping down for Tinubu- Amosun debunks report

Ex-Governor of Ogun State, Senator Ibikunle Amosun has declared that he is not in the presidential race to partner  Bola Tinubu or any other aspirant of the All Progressives Congress (APC).

According to the Senator, he did not obtain the APC senatorial form or attend the screening exercise organised for APC senatorial aspirants, as some people are speculating.

It was learnt that over the weekend, some media houses reported that Amosun had agreed to step down for Tinubu, having been  cleared for the Ogun Central senatorial race.

In a statement by his media aide, Bola Adeyemi, he said that the Ogun Central Senator “procured only the forms for the presidential ticket of the APC and did not attend the screening exercise for Senatorial aspirants because he is not one.”

He urged Nigerians to reject the “false news”, adding that “Amosun is in the race for the presidential ticket of the APC and has no plans to align with any politician in the race.”

Previous: 2023 Presidency: El-Rufai throws Kaduna delegates into confusion over Tinubu and Amaechi
Next: FG vs NASS: Supreme Court fixes hearing on Electoral Act on May 19