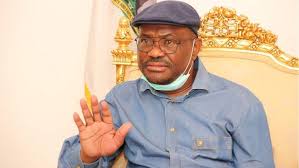 2023 Presidency: I have what it takes to rescue Nigeria- Wike

Governor of Rivers, Nyesom Wike, has declared that he has what it takes to serve and salvage Nigeria as its president come 2023.

It was gathered that the visit was part of ongoing consultation ahead of the party’s presidential primary.

Speaking to newsmen, the Rivers governor urged them not to waste their votes as delegates at the party’s presidential convention on candidates who cannot win the 2023 poll.

“If you want PDP to win election in 2023, I have made myself available. Give me the ticket, let me go and take the power for you. We are talking about who can take this power from APC (All Progressives Congress). That person is me.”

Wike insisted on the need to rescue Nigeria from dying saying the task required men of courage who love the country.

“So, it is not for sentiment, it is not for people to come and tell you, look, it must come from here, no, no. It is for those who have the capacity. If given the opportunity, I will replicate what I’ve done in Rivers State as President of Nigeria.”

He blasted the All Progressives Congress (APC)-led Federal Government for the many lies they keep telling Nigeria in improving the agricultural fortunes of the country.

“They said they have given over N300 billion for agriculture. I have no problem with that. Even if they have spent N1trillion, where is the food? I