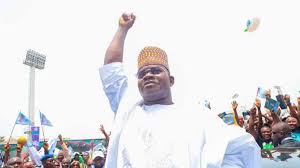 2023 Presidency: I will defeat the monster called zoning- Yahaya Bello

The Government of Kogi State has noted that  Governor, Yahaya Bello is ready to challenge the status quo as regards the issue of zoning ahead of the 2023 elections.

The statement was made on behalf of the Governor by the Kogi State Commissioner for Information, Mr. Kingsley Fanwo.

He spoke while addressing a press conference in Abuja, stressing that zoning of political offices should not be part of the criteria for recruiting leaders.

He said: “In 2023, it is going to change. The zoning may be competence, capacity, patriotism, a unifier, a bridge builder. That is where we are zoning it to. Whether the person is a northerner, Southerner, Igbo, Hausa it does not matter anymore.

“We have been zoning since 1960, are we better off? So, that’s where we are going. And that’s what we have come out to challenge, because it will take a courageous man like Yahaya Bello to challenge and defeat that monster before we can be talking about development.”

He that the Governor and his tram are fully ready for the battle ahead and were also determined to defeat the monster called zoning.

The commissioner added: “So, on rotation, we are ready for the battle ahead. It is going to be about capacity and competence. Until we challenge the status quo, that idiosyncratic page must be broken before you can be talking of progressing as a nation, as a people.

Fanwo insisted that his principal was not intimidated by the pedigree, profile, experience and exposure of other presidential aspirant

Previous: Shehu Sani tackles NEF for asking Buhari to resign
Next: 2023: Give us a female Senator in Osun West- Group cries out to APC