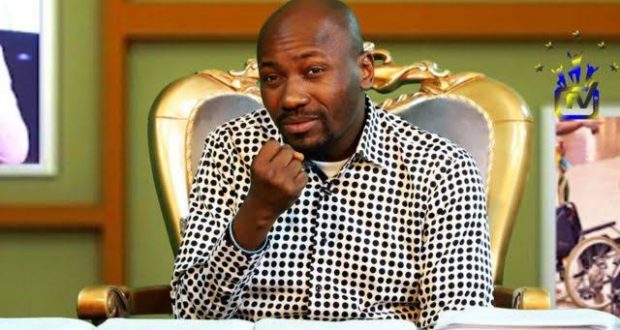 2023 Presidency: Igbos are the problems of themselves- Apostle Suleiman

Notable cleric, Apostle Johnson Suleman of the Omega Fire Ministries has said Nigerians do not trust Igbos because they don’t support themselves.

Speaking during  a sermon in his church, he said Igbos tear themselves down at any given opportunity.

He added that an Igbo Senate President, Evan Enwerem was removed by another Igbo man, Chuba Okadigbo.

According to him, Okadigbo was also replaced by Anyim Pius Anyim.

The clergyman explained that someone who could sell his brother would not be trusted by anyone.

‘’Somebody from the South, somebody from the East. You betray your people. Look at this agitation for Biafra. Who are the people attacking Biafra most, Igbos. Shameless Igbos.

He also alleged that if an Igbo man employs an Igbo boy in his shop, the boy will wreck him.

“He will carry all the man’s money, he will buy land. He wouldn’t wait to be settled.

“The problem of Igbo is Igbo. I repeat it, if you sell your brother, even the buyers will not trust you,”

Previous: 2023:Presidency: I am more qualified than Tinubu, others- Amaechi
Next: Oyo: Makinde can’t use corruption allegation to destroy APC- Chieftain