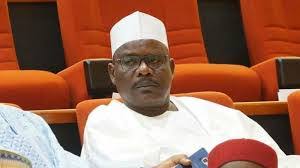 2023 Presidency: It will be unfair for APC to abandon zoning- Sen Ndume

Ndume, who spoke on Channels on Tuesday supported Akeredolu’s position, saying that it would be unfair for the party to do otherwise.

Ndume, said that the principle of zoning was part of the federal character, stressing that zoning was adhered to during the election of party executives.

Ndume said: “I support the position of Governor Akeredolu 100 per cent. I adopt the counsel of the governor to the party.

“I believe in equity, fairness and justice. This, we did during the emergence of our national chairman. That was why nobody from the south contested for the chairmanship position of our party.

“In 2015, based on the principle of zoning, it was agreed that the presidency should be zoned to the north. And that was why most of those that contested were from the north. This time around, I don’t think that should change.”

He dismissed the argument that zoning would disenfranchise some Nigerians.

The Senator said zoning and rotation are issues of equity under the principle of federal character,, noting that it covers both elective and appointive positions.

He added: “On the principles of fairness, justice and equity, we should allow the south to put forward their candidates and let the party members decide.”

He said though he was not at the top of the party affairs, he expressed confidence in President Muhammadu Buhari’s desire and determination to ensure justice and equity prevail.

Speaking on if the APC would heed Akeredolu’s call, Ndume said: “I am hopeful that the party under the leadership of Abdullahi Adamu, the APC chairman, will heed the counsel by Governor Akeredolu.”

The Senator  disagreed with the notion that if the PDP gives its ticket to a northern aspirant, the APC should also do the same.