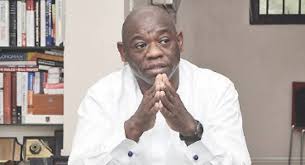 It was learnt that  three aspirants have so far purchased the forms for the presidential ticket of the party. They are retired Col. Gboluga Mosugu, Mrs. Patience Key and Kola Abiola.

His father, MKO Abiola is the winner of the June 12 presidential election that was held on June 12 1993, but the outcome of the poll was not announced then as the military President, Gen Ibrahim Babangida annulled the election which was adjusted to be freest and fairest in Nigeria.

MKO was later arrested under Gen Sani Abaca for declaring himself as President in Epetedo, Lagos in 1994. Abiola never came out of the detention as be died in a suspicious circumstance in 1998

Previous: 2023: Why I am qualified to rule Nigeria, Fayemi explains
Next: 2023: My working under Buhari has prepared me to lead Nigeria- Osinbajo