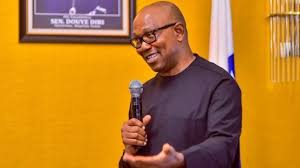 2023 Presidency: Obi reveals the type of running mate he prefers

The presidential candidate of the Labour Party, LP, Peter Obi, has broken silence on his choice of his running mate.

The former Governor of Anambra insisted that he preferred a younger person as vice-presidential candidate.

Speaking in an interview  on Arise TV Morning Show on Wednesday, he said he prefers a younger person with a capable hand with something to offer to offer.

There are speculations that he has  chosen Sen. Yusuf Datti Baba-Ahmed, a businessman and politician, as his vice-presidential candidate.

But he refuted this, saying that he is  yet to pick a running mate as consultations are still ongoing.

Obi said, “We are talking to quite a number of people and Baba-Ahmed is a capable hand and I wish he is the one. But I wish I could work with somebody who is younger.

“I prefer younger people with fresh ideas who have a lot to offer rather than recycling old hands. I want a competent person and I’m building a formidable team.

“I want people who can look me in the eye and disagree with me during cabinet meetings. People who have their own minds and ideas. If you agree with me in three meetings, then you are gone because that means you don’t have your own ideas. I want people and cabinet members who can say, ‘Mr. President, you are wrong