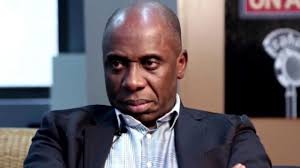 2023 Presidency: Open up on your alleged alliance with China- Group tells Amaechi

A group, National Coalition for Good Governance (NCGG) has called on the Minister for Transportation, Rotimi Amaechi, to come clean on the allegation that the Republic of China may have been bankrolling his presidential ambition.

Amaechi, the Director-General of President Muhammad Buhari’s campaign organizations in 2019, had last week, declared his 2023’s interest under the ruling All Progressives Congress (APC).

There were allegations that China was rooting for the Minister to be crowned Nigeria’s next president to allow him to continue defending Chinese interest in Nigeria.

National President of NCGG, Prince Gbenga Oloyede, at a press briefing in Abuja on Wednesday, said, “to the extent that Amaechi has not satisfactorily disclaimed these allegations, we at NCGG view this as proof that he has such a working arrangement with China and other countries that would soon be made known to Nigerians. This is nothing but an attempt at selling Nigeria into the second round of colonisation”.

Expressing concern, the group said considering “how politicians like Amaechi in other African countries have practically ceded the sovereignty of their nations to China under the guise of unpaid loans obtained for building infrastructure. China has stepped-in in such countries to confiscate shopping malls, seaports, and even international airports under the guise of these countries defaulting on their loans. The transportation sector under Amaechi’s supervision has exposed Nigeria to such toxic loans and the Chinese are now working for him to become president so that they can confiscate Nigeria as they did to those other countries”.

Oloyede added, “Interestingly, the transportation sector that Amaechi superintends has the highest injection of Chinese sourced loans, which is further confirmation that Chinese support for an Amaechi presidency is no longer in the realm of allegations but rather an ugly fact that is staring Nigerians in the face”.

He opined that “under Amaechi’s watch, the transportation sector has the highest level of abuse and harassment of Nigerians by the Chinese, who usually quip that they run the government, which is a clear warning of the slavery to come if Nigerians allow Amaechi to fully hand the country over to China after they manipulate the election in his favour. These abuses were reportedly regularly brought to his attention, but he woefully failed to do anything about them because he already answers to China.

“His pattern of awarding most of the contracts in the sector to the Chinese – an arrangement that ensures that loans obtained from China are immediately handed back to China is another confirmation of the Chinese interest in covertly supporting Amaechi so that he can hand Nigeria over to them on a larger scale”.

The NCGG urged the Minister to note that, hobnobbing with China on a scale that allows them to meddle in Nigeria’s elections would invalidate the allegiance he would pledge to the country as President, adding that he should also clear the air on his alleged acquisition of citizenship of the Republic of China.

“We, therefore, want the Minister of Transportation to note that Section 137 (1) a) of the Constitution of the Federal Republic of Nigeria (as amended) categorically states that “A person shall not be qualified for election to the Office of the President if – (a) subject to the provisions of section 28 of this Constitution, he has voluntarily acquired the citizenship of a country other than Nigeria, except in such cases as may be prescribed by the National Assembly, has and made a declaration of allegiance to such other country.

“Our challenge to Amaechi is for him to publicly tell China to stop supporting him while also cutting off his clandestine meetings with them. If the Minister wants to lie about the Chinese backing for him or deny the same, we further challenge him to disclose the number of meetings he has had with Chinese teams in the last two years and prove that the meetings were solely about funding and construction of railway system.

“We call on the Economic Community of West African States (ECOWAS), African Union and other supra-national bodies to closely monitor the electioneering process in Nigeria and to ensure that China or any other country is not allowed to destroy the democratic process in Nigeria. The global practice is for countries not to allow third-party nations to meddle in their elections and Nigeria should not be an exception at the hands of China”, the group added.