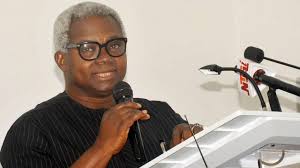 2023 Presidency: PDP has shot itself on foot over zoning- VON DG

A top stalwart of the the ruling All Progressives Congress (APC), Mr. Osita Okechukwu has mocked the opposition Peoples Democratic Party (PDP) over zoning of presidential ticket.

There are speculations that the opposition party have jettisoned the idea of zoning its presidential ticket.

The APC major stakeholder said it was akin to buying vehicle with the name tag, ‘No refund after payment’.

The Director General of Voice of Nigeria (VON) said that by abandoning zoning, PDP had violently breached its own constitution and the national convention which governed our 4th Republic.

According to him, by discarding zoning, PDP had shot  endangered internal democracy, national unity and had abandoned its original stronghold, the southern belt

“The Bazaar Carnival stage in the next few weeks has branded PDP’s vehicle No Refund after Payment,” he said.

Okechukwu spoke while reacting to the news that the PDP has thrown open to all the geopolitical zones, in the country, the contest for its presidential ticket.

Answering questions from journalists, Okechukwu noted that the latest decision taken by the PDP would expose its presidential aspirants to extortion by party members, who are fully aware that there is no refund in money politics.

Asked why he tagged PDP’s new vehicle, “No refund after payment”? Okechukwu retorted, “Firstly, the PDP has shot itself on the foot, has breached its own constitution and the golden zoning convention governing our 4th Republic; hence endangering its internal party democracy and national unity.

“In addition, by this singular unforced error of selfishness, PDP has thrown away the baby and the bathe water.

“Secondly, and most importantly, the PDP by jettisoning the zoning of president has abandoned the Southern belt which is its original stronghold. Especially now that APC has patriotically zoned the presidency to the Southern belt.

“Thirdly, PDP has committed error of judgment by banking on northern voters, forgetting the sophistication of Northern Voters, who voted MKO Abiola against Bashir Tofa and who voted Chief Olusegun Obasanjo when Yorubas did not vote for him in 1999. They are gambling with the wrong horse; all Northerners and Nigerians in general need is healing, unity and peace.”.

Previous: Group explains why elections may not hold in 2023
Next: 2023: ACF chieftain explains why the north should support Tinubu