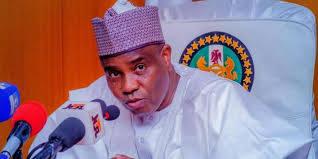 2023 Presidency: PDP should choose between zoning and winning- Tambuwal

In what seems to be a statement against zoning arrangement, Sokoto Governor, Aminu Tambuwal, has told  leaders of the Peoples Democratic Party (PDP) to choose between zoning of its presidential ticket and winning the election.

The Governor, who is nursing presidential ambition of the PDP, also said that no single zone can win the presidency alone.

Tambuwal’s statement is s veiled response to the insistence by the Rivers State Governor Nyesom Wike, that the PDP presidential ticket be zoned to the Southsouth region.

The Governor made the statement in in Abuja on Tuesday during a meeting with former principal officers of the National Assembly.

It was learnt that the meeting was in continuation of his consultations to garner support for his aspiration.

Previous: Sacking of Lawmakers: Security operatives take over Cross River Assembly
Next: 2023 Presidency: My Minsters will be below 35 years- Saraki promises