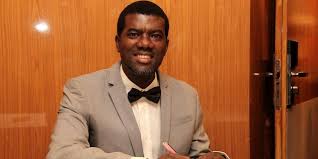 Former presidential aide under the administration of ex-President Goodluck Jonathan Reno Omokri, has debunked reports that his former boss would soon declare to run for the 2023 presidential  elections.

It will be recalled that reports have gone viral on social media saying that Jonathan, whose presidential poster surfaced with the reportd would soon join the presidential race under the ruling All Progressive Congress APC.

It will also be recalled that Jonathan while addressing his supporters who protested at his Abuja residence asking him to declare, said he “can’t tell” whether to run yet.

He asked his supporters to be studying the situation.

Reno noted that Jonathan  has not made such a statement, saying it was the imagination of the journalist.

He said, “Disregard the news credited to Reuben Abati that former President Jonathan will soon declare. He never made any statement like that. At best, it is a figment of the imagination of that journalist #FakeNews!”

Previous: I am not bound by any agreement on consensus in PDP- Atiku
Next: Reps member, Ozurigbo dumps APC for PDP