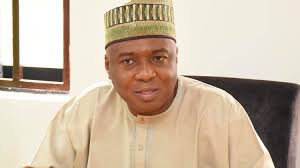 Former President of the Nigerian Senate and presidential hopeful on the platform of the Peoples Democratic Party (PDP), Senator Bukola Saraki, has given more explanation about consensus candidates ahead of 2023 general elections.

According to him,  he and other stakeholders  of the party are currently working towards coming up with a consensus presidential candidate that has the capacity to address the prevailing insecurity in Nigeria.

The former Governor of Kwara State made this remark after a closed-door with the Abia State Governor, Okezie Ikpeazu at his country-home Umuobiakwa community in Obingwa Local Government Area of the state, alongside other notable presidential aspirants of the PDP.

The aspirants were in Abia on the possibility of a consensus presidential candidate for the party.

Other presidential aspirants who went to the Abia Governor alongside Saraki were the Sokoto State Governor, Aminu Tambuwal; Senator Bala Mohammed of Bauchi State and Dr Mohammed Hayatudeen.

Saraki stressed out that the party is driven by the determination to turn Nigeria around and also expressed optimism that the PDP would emerge victorious in the upcoming general election in the country in 2023.

According to the press statement by Ememanka, Governor Okezie Ikpeazu was joined in receiving the PDP Presidential aspirants by a delegation led by the State Commissioner for Local Government and Chieftaincy Affairs, Hon Christopher Ekweremadu and a foremost industrialist, Elder Raymond Aliga.

Previous: I am the one taking power from APC by God’s grace- Wike
Next: 2023: PDP fixes new dates for purchase, submission of forms