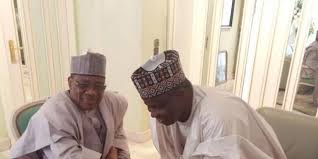 He also visited the former Head of State, General Abdulsalami Abubakar in his residence.

It was gathered that Tambuwal, who arrived Minna on Tuesday evening, first met with Babangida at his Uphill residence.

The Governor had a closed-door meeting with him for about an hour before visiting Abdulsalam at his residence opposite IBB’s house.

He spoke with Abdulsalam Abubakar for about 30 minutes.

In an interview with bewsmen after the meeting, Tambuwal said that he was in Minna as part of his consultative tour in his bid to vie for the presidency under the Peoples Democratic Party (PDP).

According to him,  the 2023 elections may not be based on zoning, calling on the PDP to work towards winning the elections rather than being fixated on zoning.

He added that political parties need to jettison zoning and throw up candidates for Nigerians to decide and elect.

“Zoning was a deliberate action by the political class of this country midwived by the government at the centre to address a particular concern, the June 12.

” How come when we saw the advent of COVID-19, we were not applying HIV drugs to COVID-19? The power shift in 1999 was to the south-west to assuage a particular situation.

“Go back to the history of democracy in Nigeria. In 1979, NPN had Shagari, NPP had Azikiwe, UPN had Chief Awolowo, GNPP had Waziri Ibrahim and PRP had Aminu Kano.

“The main issue is that political parties throw up candidates and Nigerians decide on who to elect for their president.

“The zoning arrangement made was not meant to completely erode the constitutional rights of the citizens. Our party is yet to decide but it has never been the main issue,” he argued.

On the consensus candidate for PDP, Tambuwal explained that engagement was on and there have been series of meetings between Senator Bukola Saraki, Governor Bala Mohammed and himself adding that it is a work in progress.

“We are engaging ourselves. First, we have agreed that it is about this country and not about an individual’s ambition.

“We have agreed that there is a need to come together to know the tension and make sure that we work as a team. It is a work in progress and we will meet again and further the conversation,” he said.