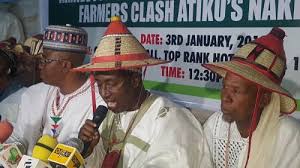 Miyetti Allah Kautal Hore has said that herders won’t support any southern candidate who is against open grazing should he or she run for president in 2023.

It will be recalled that  17 Southern Governors, had kicked against open grazing and signed laws banning such to effect.

Miyetti Allah spokesman said his group won’t support southern governors or any southern candidate who is against open grazing and who also oppose the collection of Value Added Tax by the Federal Inland Revenue Service.

He said, “Our concern is not where the President comes from but certainly we know those that we cannot support; those that want to destroy our means of livelihood, we would campaign against them.

“We are not worried where the President comes from but we need a competent nationalistic person to take over from Buhari. We don’t need people with sectional sentiments; people that think they can make exclusive economic policies, people that think their zones should have more preference, they want to control the VAT, destroy our traditional livelihood.

“The governors can say anything but ultimately, the votes determine who becomes the President.

Previous: Many Nigerian political leaders have fallen below the bar- Lawan laments
Next: Why APC can’t produce southeast presidency in 2023- Abaribe