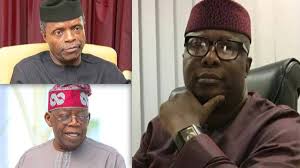 2023 Presidency: Why I am backing Osibanjo- Ojudu

President Muhammadu Buhari’s Special Adviser on Political Matters, Babafemi Ojudu has said he would support Vice President Yemi Osinbajo if he declares to run for the 2023 Presidency.

Ojudu described Osinbajo as hardworking, committed, and selfless, hence a better choice for the Presidency.

Speaking with media entrepreneur, Chude Jideonwo, the Presidential aide promised to align with Osinbajo because he is technologically savvy, and can blend with the young and the old.

Ojudu stressed that Osinbajo had the tendency not to steal Nigeria’s funds if elected President.

According to Ojudu, Osinbajo is committed to making Nigeria a better place.

He said: “If I support Osinbajo, he deserves to be supported. I see the way he works, day and night, committed, not asking for things for himself, committed to the people, committed to Nigeria and well educated.

“He can stand anywhere in the world, comfortable with the young and the old, conformable with new technology and always coming out with solutions to problems. I mean, it doesn’t cost me anything to align with such a person.

“So, if I see somebody who has all of those attributes, I have the right to support that kind of person, so, if Osinbajo declares tomorrow that he is running, I will have no apology. I will support him, and I will work for him.”

There are speculations that Osinbajo may soon declare his intention to succeed President Muhammadu Buhari in 2023.