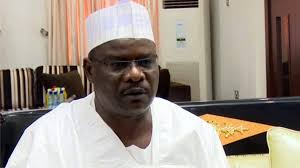 2023 Presidency: Why I am throwing my weight behind Amaechi- Sen Ndume

A Borno State Senator, Ali Ndume, has said he was one of those who asked the Minister of Transportation, Rotimi Amaechi, to run for the Presidency in 2023.

The Borno South Senator said Amaechi “has the pedigree, energy and intellect” needed to rule Nigeria.

The federal lawmaker made this on Channels Television’s Politics Today, while declaring his support for Amaechi’s Presidential ambition.

Responding to a question on the  support for Amaechi’s Presidential ambition, Ndume said: “Yes, that is my project.

“I started it, I am one of those who had asked Amaechi to run.”

Ndume believes Amaechi will be a great candidate for the Presidency.

The minister recently declared his intention to run for the Presidency in 2023.

The former Governor of Rivers State had disclosed his intention while addressing leaders of the All Progressives Congress (APC) at an event in Port Harcourt.