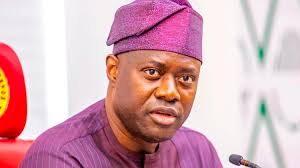 In face of the preparations towards the 2023 Presidential poll, Governor Seyi Makinde of Oyo State has said that the worst presidential aspirant in the  Peoples Democratic Party (PDP) is better than the best aspirant on the platform of All Progressives Congress (APC).

The state Governor made this remark while speaking in Ibadan, the state capital.

He made this Tuesday when he received former Senate President, Bukola Saraki.

He said that whoever emerges as the candidate of PDP would salvage the country from the throes of economic woes and insecurity.

He added that the PDP convention is an avenue for the party to take a serious decision for itself and the country.

He described the former governor of Kwara State as a good presidential material, saying that the least of the PDP presidential aspirants is better than the best APC has to offer.

“Some believe that in PDP, the least of our aspirants is better than the best APC wants to offer.

“In the next 10 days, we have to take a very serious decision for our party and the country as well. I don’t have any doubt that we will get it right this time around.

“They say 24 hours is a long time in politics. So, we have to keep striving, pulling everybody together such that we are able to narrow the field and go to the presidential convention as a united family.”