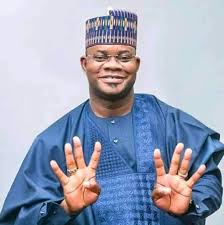 2023 Presidency: Zoning or no zoning, I will clinch APC ticket- Yahaya Bello

Governor Yahaya Bello of Kogi State has boasted that he would clinch the presidential ticket of the All Progressives Congress (APC) ahead of the 2023 elections.

Gov Bello appears not to align himself with the expected zoning formula of the APC.

On Saturday, the APC elected a former Governor of Nasarawa State, Abdullahi Adamu, as the National Chairman of the party.

It should be noted that  Adamu hails from the same North Central geo-political zone as Gov Bello.

But, Bello, who said it does not matter where the National Chairman comes from, vowed that he would contest and win the ticket of the party, notwithstanding the zoning arrangement put in place by the party.

Speaking on Channels Television’s Sunrise Daily on Monday, Bello maintained that he would clinch the ticket even if the party adopts consensus, direct or indirect mode of primary elections.

As a contender, Bello stressed that he is not afraid of any mode of primary, stating that the party would choose the best method to elect a candidate who can build bridges across the nation.

“By the grace of God, after my emergence as the presidential candidate, every other zoning arrangement will sort itself out naturally, just like what you saw at the Eagle Square on Saturday.

“By the grace of God, we are going to pass through democratic process; consensus is part of it, voting is part of it, but I am confident that whichever way you go by, our party will come out the best by electing me as the flag bearer of the APC,” Bello insisted.