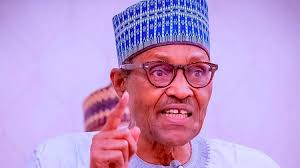 The President,Muhammadu Buhari has finally supported rotation of presidency to South in 2023

.The President made this remark during  a dinner with the All Progressives Congress presidential aspirants in Abuja.

A source told newsmen that Buhari failed to name any consensus candidate.

It was gathered that he asked the aspirants to consult ahead of the party’s primary.

At a meeting with the state governors on Tuesday, Buhari had called for reciprocity in choosing his successor.

“In keeping with the established internal policies of the party and as we approach the convention in a few days, therefore, I wish to solicit the reciprocity and support of the governors and other stakeholders in picking my successor, who would fly the flag of our party for election into the office of the President of the Federal Republic of Nigeria in 2023.

“I wish to assure you that the consultation process shall continue to ensure that all aspirants and stakeholders will be brought on board right through to the convention.

“This will also ensure that any anxiety occasioned by different factors are effectively brought under control and that our party emerges stronger,” Buhari said.

Ondo State Governor, Rotimi Akeredolu, also in May, warned the APC against zoning the 2023 presidential slot to the northern part of the country, saying that would lead to a crisis.

Read Also
BREAKING: 10 APC govs ask Northern aspirants to withdraw from presidential race
Northern APC govs back power shift to South
JUST IN: Tinubu, Osinbajo, others arrive Presidential Villa for meeting with Buhari
According to him, it is the turn of the southern part of the country to produce the next president.

Akeredolu said the agreement reached when the APC micro-zoned party’s offices during its National Convention must be adhered to.

The statement read, “Our party, the All Progressives Congress, has started the process which will eventually culminate in the presentation of elected political leaders, who must steer the affairs of the country for another term. We have been able to hold the party’s Convention successfully. New officers of the party have emerged in a process that is widely acknowledged as rancour-free. The level of understanding and maturity displayed by all and sundry has been commendable. Known adversaries have been forced to accept the emerging fact that our party is formidable and ready for the next general elections.

“The current socio-economic crises are surmountable. It is commendable that the government is addressing these issues without drama. The Federal Government and leadership of our great party will come out stronger. We cannot, therefore, afford any internal bickering which holds the potential promise of causing distrust and militating against cohesion, harmony and the zeal to achieve set objectives.

“The current democratic dispensation is anchored on the unwritten convention driven by a principle of equity. Political expediency dictates, more appealingly, that while adhering to the spirit and letters of the laws guiding conduct of elections and succession to political offices, we must do nothing which is capable of tilting the delicate balance against the established arrangement which guarantees peace and promotes trust.

“Our party just elected officers on the established principle of giving every part of the country an important stake in the political calculus. The focus has now shifted to the process which will culminate in the participation of our party in the general election scheduled for next year. All lovers of peace and freedom must do everything to eschew tendencies which may predispose them to taking decisions which promote distrust and lead to a crisis, the end of which nobody may be able to predict.

“The leadership of the party ensured that the principle of rotational representation guided its decision at the just-concluded convention. The party chairmanship position has gone to the North. All other offices have been filled on this understanding. This is the time the leaders of the party must make a categorical statement, devoid of equivocation, on the pattern of succession.

“The party Executive Committee has fixed a fee for the purchase of the nomination form for the office. It is expected, fervently, that it will proceed to complete the process by limiting the propensities for disagreement to a region for possible micro-management. It is very expedient that we avoid self-inflicted crises before the general elections.

“It is the turn of the Southern part of the country to produce the next President. The party leadership should have no difficulty in making pronouncements on this very important issue, just as it has fixed various fees for the purchase of forms. This must be done without delay. The principle of Federal Character is enshrined in the 1999 Constitution, as amended. It will be disingenuous for anyone to argue against rotation at this period.

“We must not keep our party men and women guessing about the position of the leadership of the party. This is the time to weigh in and take control of the process. No statement must suggest, even remotely, that the party harbours certain sentiments which may predispose it to consider throwing the contest open. This is certainly not the time for equivocation.”

All rights reserved. This material, and other digital content on this website, may not be reproduced, published, broadcast, rewritten or redistributed in whole or in part without prior express written permission from PUNCH.

Kindly share this story:
Nigerians can now profit from USA stock options. Our team of experts helps with the entire process. We traded Netflix stock options and earned 900% profit even when the stocks went down in April. Now you too can start earning in US Dollars. Click here to join
TOP STORIES

Previous: Tinubu’s statements an insult against Buhari, he will pay for it- Adamu vows
Next: Keyamo lauds APC governors for backing southern presidency