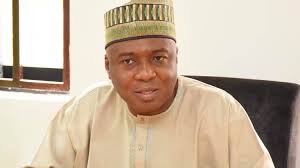 Ex-President of the Senate, Sen. Bukola Saraki, has stressed that women and youths must form critical components of government in 2023 for the development of Nigeria.

In an interview with newsmen at the National Headquarters of the Peoples Democratic Party (PDP) in Abuja, Tuesday, Saraki acknowledged that young men and women have roles to play in the party’s mission to rescue and rebuild Nigeria.

He said, “I think both women and the youths have a great role to play because at the end of the day governance is about providing for the people.

The immediate past Senate President added that, “From my time as governor and National Assembly, I’ve always worked with the youth. I heard a lot of politicians saying that today, we should check their records.

“The reality is that you can’t make laws or govern people and they won’t be part of it. Women and youths must be part of the decision making.

“My view is that women and youth who constitute more than 50 per cent of the voting population must play a key role in governance come 2023. That is what all of us collectively as Nigerians must do.”

Reacting to a question on the Electoral Bill, Saraki urged President Muhammadu Buhari to sign the bill into law.

He described the bill as a critical foundation needed for good governance.

Saraki said the Electoral Act, when signed into law, will serve as the foundation for good governance.

He said, “My appeal is that the strength of any good governance is its electoral process. If we say we are for good democracy, good governance, you must have a strong, very good Electoral Act.

“We are leaders, not only the continent, Nigeria is a strong member of the global nations, and as such when we speak, we should also do the right thing at home. We need a good and strong electoral Act, Saraki noted.

He noted that no law can ever be perfect, urging “President Buhari to sign and I think that will be the greatest legacy to lay the foundation for good governance.”