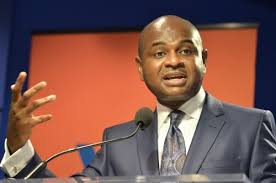 A former presidential candidate in the 2019 Kingsley Moghalu has claimed that at least six political parties have planned to merge and form a mega party ahead of the 2023 general elections.

He dropped this hint  when he hosted Nze Akachukwu Nwankpo, the candidate of the African Democratic Congress (ADC) for the November 6 governorship poll in Anambra State.

He also called on Nigerians to register in order to be eligible to vote in 2023.

“We hope to be a key part of a much larger third force that is building up for the presidential elections which will include a merger of about six or seven or more parties.

“So, I believe that in the 2023 elections the citizens of Nigeria should not allow it to be a contest between two sides of the same coin because there is no difference. It should be a battle between the old and the new – between the old Nigerian and the possibilities for a new Nigeria. That is what 2023 should be,” Moghalu said.