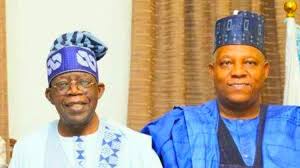 2023: The choice of Shettima as Tinubu’s running mate a blessing- Group

The All Progressives Congress (APC), Northeast zone expressed happiness towards the emergence of Ibrahim Shettima as the running mate of Ahmed Bola Tinubu, the presidential candidate of the ruling party APC.

It will be recalled that Shettima, on Sunday was suddenly  announced as the running mate to the APC presidential candidate.

Although, the choice has been generating mixed reactions, however, the party believes that the choice of Shettima would attract more votes to the party.

This APC in the region made this statement by  its National Vice Chairman, Mustapha Salihu.

He said the “choice of Senator Kashim Shettima is undoubtedly in recognition of his stellar track record of competence, integrity and excellence displayed as two-term Governor of Borno State and Senator.”

The enjoined voters to rally round and Mobilize support for Asiwaju Bola Tinubu, noting that the candidate consulted widely before settling for Shettima.

He added he “has given the APC North East Zone the added energy to rally our party supporters, members and all stakeholders in the zone towards actualising Tinubu’s presidential bid.”

The party said Tinubu “must be commended for once again being a staunch democrat and progressive going by his wide engagement and consultation with stakeholders which paved the way for his eventual choice of Senator Shettima as running mate.”

They added that “from his days as Governor of Lagos State, Tinubu has always exhibited a knack for assembling the right team to achieve efficient and good governance.”

Previous: Osun 2022: APC has brought thugs from Lagos – PDP raises alarm
Next: The job is tough and challenging, I am eager to leave – Buhari opens up