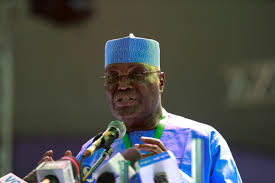 2023: What Igbos will do if Atiku picks running mate from south east – Ohanaeze

A top chieftains of  the Ohanaeze Ndigbo socio-political organisation, Chuks Ibegbu, has disclosed that the southeast region will not reject it if Atiku  if he decides to pick an Igbo man as his running mate in 2023.

According to him,  the vice presidential slot is not what the southeast aspire for in 2023.

Ibegbu: said “Atiku is at liberty to pick his Vice President from anywhere he likes, including the Southeast. Even if he wants to pick his running mate from Adamawa, no problem. Our people made up their minds that it’s the Presidency they want from the onset.

“We have occupied the Presidency, Vice Presidency, Senate President, and we are saying this is the right time to have political equity by allowing the Igbos to produce Nigeria’s President.

“Until such a time when Nigerians do not mind where the Presidency comes from and build an inclusive society that thinks more of merits, then things will be the way they are.

“Our people will come back to analyze, dissect, digest, and know the implications. Don’t forget that there are people from the other side saying we don’t want to be part of this injustice in Nigeria.”

Previous: It is the turn of the south to produce next President- Ayade tells Tinubu
Next: 2023: People will collect money but still vote according to their conscience- Kalu