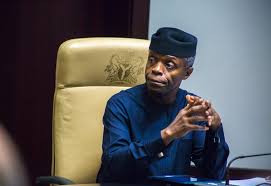 2023: Why Osinbajo is the best candidate to succeed President Buhari- Group

A group known as Osinbajo Grassroots Organisation, OGO, has declared that the Vice President, Yemi Osinbajo, is the future of Nigeria.

In a statement he signed and issued in Abuja, Ojo insisted  Osinbajo has at several instances displayed his competence and ability to govern Nigeria.

According to Ojo: “We have identified in the Vice President a leader of unimpeachable character; someone who can continue on the good works already started by President Muhammadu Buhari.

“We do not want Nigerians to gamble with this very important decision to pay attention to only politicians, when as stakeholders, we as the youths of this country, can also identify a man with required competence, character and passion to move the nation forward.

“At different occasions, Prof Yemi Osinbajo has demonstrated that he possesses the unique competence, fairness, accommodation, tolerance and respect for the rule of law to carry everyone along as critical stakeholders in the Nigerian future.

“So, we do not need him or anyone to tell us that Prof Osinbajo is a pathway to Nigeria’s future from 2023.”

Ojo said Osinbajo, after worked  diligently with the President to jointly implement policies and programmes for a period running to eight years.

Previous: Both military and civilians pressurized me to annul June 12 election- IBB
Next: APC suspends another chieftain in Abia over alleged anti-party activities