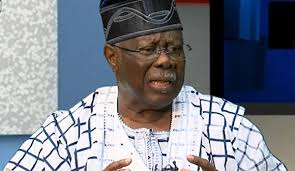 2023: Why PDP must zone presidency to south- Bode George

The mayor opposition, the Peoples Democratic Party (PDP) has been warned against leaving its 2023 presidential ticket open for all members to contest.

A chieftain of the party in the South West, Bode George said it was important to ensure that such a position is zoned to a particular region.

He made this known against the backdrop of the controversy trailing the zoning of the PDP’s presidential ticket, as activities build up ahead of next year’s polls.

Aspirants from the North feel they should be given the opportunity to test their political popularity during the party’s primary, but their southern counterparts believe it is solely their turn.

“It is mandatory, it is legitimate for the party to say yes, this is zoned to the South or to the North; but to leave it wide open is combustible,” George told Channels Television’s Sunday Politics.

George, a member of the PDP Board of Trustees (BoT), insisted that the party should zone its ticket to the South.

“I am looking at now as an engineer, there is a political equation; when they conceptualised this idea, nobody in their wildest dream thought there could be another political party that could produce the president.

“When you now say you want to throw it (zoning) away, are you telling Nigerians that it is only in certain parts of the country that you have people who have the competence or the courage to rule Nigeria? How can there be peace?”

“Are you saying we don’t have anybody in the southern part? What we are telling people [is that] we have no right as a party to tell any individual [that] you cannot contest, because it will be illegal.”