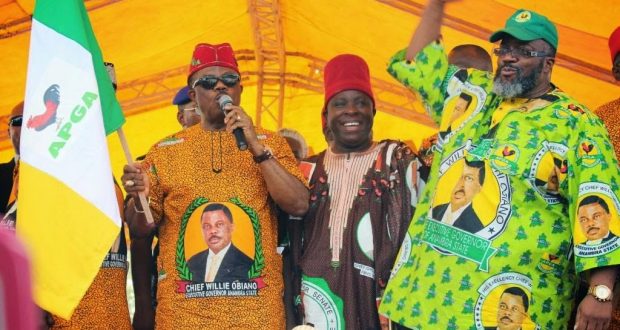 The Anambra re-run election for the vacant Anambra Central Senatorial is still generating some heated comments.

Anambra Governor, Willie Obiano, has described the January 13 Senatorial rerun in the state as simple mathematics.

He added that had he has put on his victory garb again as the Chairman of the campaign organisation of the All Progressives Grand Alliance (APGA) candidate in the election, Victor Umeh, to “crush any opposition” in the race.

Speaking, Umeh dismissed the judgment of Justice John Tsoho of the Abuja Federal High Court as dead on arrival.

Justice Tsoho had in the judgment ordered that Ikechukwu Obiora be sworn in as the winner of the 2015 Anambra Central senatorial election.

Meanwhile, the independent National Electoral Commission (INEC) has mentioned that it has not received the court’s documents on he judgement.

Previous: PDP hails court’s declaration of Okonkwo winner of Anambra Senatorial seat
Next: APGA is a hurricane that nobody can stop in the South-East, says Obiano