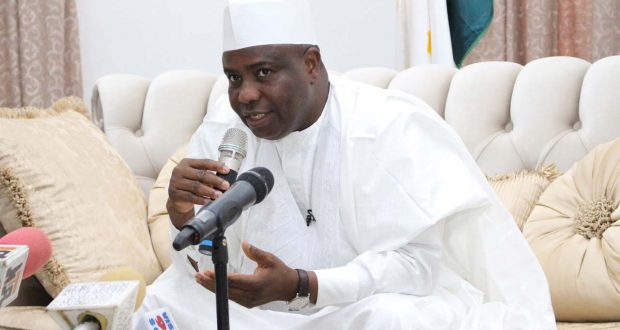 Following his visit to Asaba, the Delta State capital, on Wednesday, for a meeting with Governor Ifeanyi Okowa and ex-governor, Chief James Ibori, speculations were rife in the capital that Sokoto State Governor Aminu Tambuwal might be planning to dump the All Progressives Congress (APC) to return to the People’s Democratic Party (PDP).

Tambuwal, a former speaker of the House of Representatives, breezed into Asaba for the product exhibition and business fair to showcase Okowa’s youth empowerment programme.

But a PDP source, who pleaded anonymity, confirmed that Tambuwal really came for consultations and had useful discussions with his Delta State counterpart and Ibori, and would likely return to pick the PDP’s presidential ticket towards the 2019 election.

Rivers State Governor Nyesom Wike, who was scheduled to be part of the parley, could not make it, as he had to return to Port Harcourt for his birthday celebration. Tambuwal, who was previously in the PDP before joining the APC, shortly before the 2015 elections, came in late for the meeting with Okowa and Ibori, long after Wike had gone, due to flight delay at the Nnamdi Azikiwe Airport, Abuja.

Contacted, the state PDP Chairman, Kingsley Esiso, said that he was not aware of any plan by Tambuwal to switch camp to the opposition party, insisting that the governor came to Asaba for the job creation programme and not for politics. Chief Press Secretary to Okowa, Charles Ehiedu Aniagwu, said Tambuwal is a long-time mutual friend of both Okowa and Wike.