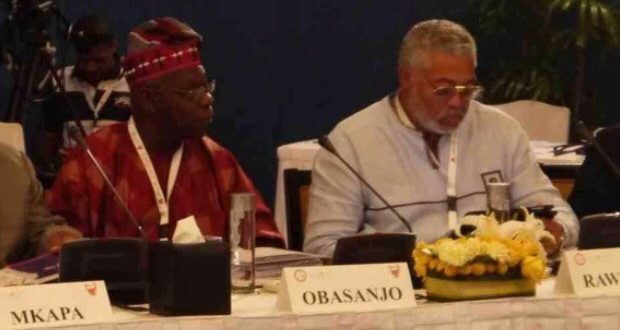 Abacha wanted to destroy my organisation, but Rawlings saved me- Obasanjo

In a condolence message to the people of Ghana on the sudden passing away of the former president of the country and elderstateman, Jerry Rawlings, ex-President Olusegun Obasanjo says he will never forget Rawlings goodwill towards him

Obasanjo said Rawlings supported and re relocated the staff of the Africa Leadership Forum, (ALF), NGO he (Obasanjo) founded in 1988 when the former Head of State, Sani Abacha wanted to destroy the organization in 1995.

“No doubt, his generous assistance to ALF and its staff makes me forever indebted to him. I can proudly say he was a true friend and brother. His works, values, and principles have had and will continue to have a great influence and impact in Africa and beyond,” he said.

“In mourning a man, who dedicated his life to the growth and development of Ghana, his country, in particular, and Africa as a whole. Like many of his contemporaries too, former President Rawlings provided the much-needed leadership and direction which impacted positively on the social stability and democratic progress recorded thus far in Ghana. A quintessential patriot and courageous leader, he will be remembered for his critical role in the evolvement of modern democratic Ghana.”

Obasanjo applauded  Rawlings styles, describing him as a  “passionate about peace, security and leadership issues in Africa.